The Nexus event has excited all the Android fan boys (including me) for the right reasons. While the two new Nexus phones – Nexus 5X and Nexus 6P - were the highlight of the event, the event was the real coming of age of the Android ecosystem. More than ever before, the slew of Android devices – phones, tablets, TV and even speakers gel together wonderfully creating the ‘ultimate Android experience’. The company will hope that this pushes the sales of all the other Android devices along with their premium phones. 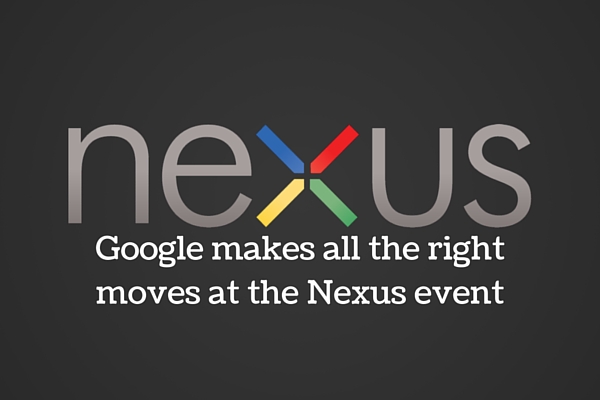 Let’s look at the phones first. Google claims that the Nexus 6P is the most premium mobile phone designed by the company. And on first glance, Google seems to have absolutely nailed it. The 5.7 inch new version is thinner, lighter and smaller than last year’s Nexus 6. The 3450mAh battery is a welcome addition by Google. Combined with the new features in Android Marshmallow OS, you can expect some serious battery life with this phone. This should sound like music to power users. Another great feature upgrade is the camera fitted in with Nexus 6P. The 12.3 MP camera also comes with sensors that allow it to work in a low light setting. Hopefully, this camera will help Nexus break its tradition of relatively poor camera performance.

The Nexus 5X is also a wonderful budget device which seems to be a worthy successor of the Nexus 5. Built with a nice 5.2 inch display, the early reviews have been pretty encouraging. I am personally a little disappointed with the 2700mAh battery. Google and LG could have surely done better in this respect. However, the fast charging feature should take some of the edge off this drawback. The other specs, including the camera, are reasonable and on the lines of what you would expect from a $350 phone.

An exciting feature in both Nexus 6P and Nexus 5X which would interest users and businesses alike is the Nexus Imprint feature. The fingerprint reader, fitted at the back of the phone, is a great way to authenticate with the user fingerprint. Third party apps can now think of interesting ways to leverage Nexus Imprint within their apps. Apart from the obvious security benefit, the feature can be very useful with financial apps such as Google Wallet.

Another announcement which hasn’t received the deserved media share is the Pixel C. Coming in with Android Marshmallow instead of the traditional Chrome OS, the tablet can connect to a magnetic keyboard which puts it in the category of Apple IPad Pro and Microsoft Surface Pro 3. However, the one big red flag is the lack of a front and rear camera. It is quite ironic that the device is called ‘Pixel’ and it comes without a camera! Video calling is an essential feature for today’s day and age. Without this feature, the Pixel C is unlikely to attract office goers who want to replace laptops. However, it is a good bet for someone who just wants a functional Android tablet.

I was delighted to see the reinvented Chromecast. The Chromecast 2, which will be available for about $35, does a look a lot neater than its predecessor. Moreover, it comes with three antennas and a more powerful Chromecast app that will enable you to engage with third party apps that support it. The second Chromecast device, Chromecast Audio, is also a nice little offering which will attract the music lovers. You can connect it to any speaker and use WiFi to listen to music. Moreover, it also connects with Spotify, Deezer, Pandora and Google Play Music which really enhances the experience for the users.

In addition, the search engine giant also announced other features such as family plan for Google Play Music, improved Google Photos, Collaborative Albums and a protection plan. These increments fill those tiny gaps which existed in the Android ecosystem.

Overall, I felt that Google made all the right moves at the Nexus event. As expected the phones were indeed the talking point of the event. I can’t wait to get my hands on the Nexus 6P. I think the Chromecast 2 is also a pretty solid offering. As far as the Pixel C is concerned, I think I will wait for the next device in this family!

Having enjoyed Twitter as the social network of my choice over the past 7 years, hashtags like #RIPTwitter worry me. Such was the ...